Essence published this beautiful, well put, thought out, straight no chaser, open letter to Olivia Pope. I couldn’t have said this any better. I wanted to share this with my subs.

As an original Scandal “gladiator” I’ve been rooting for you wholeheartedly, even when I felt like it went against everything I believe in and stand for as both a woman and a wife. Can you blame me for my girl crush? At times you’re more powerful than the President. You’re smarter than everyone in Washington, and everything you own, you bought it.

Because I love you like a sister, on Thursday nights for the last two years, I’ve sipped more refills from my oversized red wine glass than a lightweight like me ever should, all in an attempt to forgive your flaws. What flaws? The fact that you’re the President of the United States’ side-piece when you’re so brilliant the First Lady has to beg for your help even though she hates your guts. The fact that somehow you can solve a world crisis in under an hour (in real and TV time) without even changing your pants suit, but you can’t seem to stop your knees from weakening and your lips from quivering the minute your “secret” cell phone from President Fitz starts vibrating on one of your gorgeous end tables. Liv, I know you’re not perfect. Fine. I get it. Love is your one weakness, your Achilles’ heel if you will. Up until now, I’ve been able to bite my lip for the sake of good TV but it’s time for me to be a friend.

Last night you let me down Liv, and I think you know the exact moment that it happened: After learning that your lover shot the missile that caused the plane crash you believe your mother perished on, you still take this man’s phone call? What is there left to say? In order to move past this, you need to know why Fitz shot down the plane? Who cares!? Your mother – the woman who gave you life—was still a passenger on it and there isn’t enough concern in Fitz’ voice or amazing, angry makeup sex in the world to change that fact.(SPOILER ALERT: We know she survived now, but you don’t yet!)

This hurts me so badly because my wounds were still fresh. I was still grappling with how you could be schoolgirl excited over being asked to run the re-election campaign for a murderous, cheating husband who not so long ago treated you like his personal whore because he found out you had a part in one little white lie that got him to the big White House. And, now you go and do this? Ms. Pope, for any woman, especially one as powerful and successful as you, there is no lower place you can be in with a man. He has manipulated your undying affections for him for his personal (and sexual!) gain time and time again and you’ve just learned that his involvement in your misery began nearly 20 years ago, yet the only resolve you have is to briefly hesitate to take his call? Girl, bye! Enough is enough, Liv.

You’re right: You are surrounded by murderers. In my book, that’s more than just a red flag; it’s a deal breaker. If you have any self-esteem left, and half the brain we all fell in love with, I need you to pack your emotional baggage into your Prada bag and keep it moving right on out of Fitz and Jake’s life. Give Mellie back the man she practically sold her soul to the devil for (don’t worry, her letter’s in the mail tomorrow) and stop letting your love for all of the men in your life keep you from seeing that they no longer deserve your love or your respect. 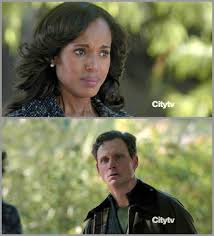 To put it to you in a language I know you’ll understand: This situation is not handled, but it sure needs to be. What’s your move, sis? We’re waiting.

Yesssssss one time for the one time!!! Any thoughts on this??

4 thoughts on “An Open Letter to Olivia Pope”