Written By: Robyn Jasmine for A Brown Belle Exchange

So earlier this week, I posed this question to my Face book family that I needed clarity on…

“Serious question: Are we as women letting men we date drive our cars? For example, we meet a guy and start dating 2-3 months….is it cool to let him drive our brand new car or whatever type of car we have, without me in it? Like sure take my car to the club, I’ll be here waiting on you to get back….. I need answers.”

The responses were comical yet thought provoking.

Ashley G: Does he not have his own car…? Or is my car more efficient on gas? Are we just switching and I’m driving his? Does he have a larger vehicle and it’s easier to maneuver mine at the club? Idk. I have questions….

Brandon A: I’ve driven a few cars of women. I never drove it to the club or anything. It was more like to the store or something of that nature.

Nancy R: I just think it depends on your relationship with the person and again like you said how much you trust them.

Shardae R: For me… I was in about 7 months before my men can drive it… and that have to contribute to it, oil changes, maybe a car note, they ain’t riding for free and it better have a FULL tank!!!

Tiffany G: Personally, I don’t think it’s as much about the time frame as it is about the seriousness of the relationship. Two to three months for one dating situation is completely different than two to three months for the other. I’m not very materialistic, so once I’m all in; I have a “what’s mine is yours” mentality, and the men that I have seriously dated have the same attitude. Furthermore, at this age I’m not at all interested in wasting my (or anyone’s) time, so if I’m “dating” someone for two or three months and I think he is the type to pick up his homeboys in my car or drive reckless or try to stunt at the club, then he’s not a guy I would be dating (especially not seriously) so he wouldn’t fit the “Borrow the Car” criteria lol

So here’s the situation:

I started having second thoughts about cutting off a guy who was relatively “good on paper” and was wondering if I should hit him up and see if we could have a do over. (I didn’t btw but for other reasons) A mutual friend of ours told me that he had started dating a new woman who was successful, pretty, etc but she was just too clingy and was acting all crazy with the guy. She lets him drive her car (newer BMW model) often. His car is a 2007 Acura. (This is important because it shows the difference in the economical and social acceptance). He drives it to work, to clubs, any and everywhere.

So I started thinking. Didn’t they just start dating? Isn’t that a little too soon, to trust someone with your vehicle, luxury or not? Does she not realize that people in South Florida cannot drive (including said gentlemen) and she trusts him enough to not wreck it? Furthermore, is her luxury car a tool used to entice him to continue dealing with her despite her shortcomings? 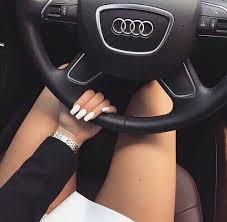 Tiffany G stated that  “too often, too many women have become the aggressors in a dating situation; it used to be where the guy tried to court the woman, now it seems like a lot of women are now doing the courting to force a relationship. It’s another form of bait.

Since when have the roles been reversed?

It’s no secret that South Florida is notorious for having the smallest group of quality individuals that are worth seriously dating. This city is a party city, with its plethora of strip clubs and popular SOBE night life.  No one here is looking to marry and live happily ever after.

So it seems that the women, whenever we find a man that is “good on paper” we are throwing out all the stops to keep him interested and around, if we feel we can’t rely on our personality. Letting him drive our cars, having sex WAY too soon, investing entirely too much energy on a soul that we know may not be for us, all to have the happy ending. It’s so unfortunate.

There is a difference between DATING and already in a RELATIONSHIP. Once the two of you have already committed to each other, I could see and understand the idea of switching cars, because at this point the trust level has been established.  It is even more concrete if the couple lives together.

However in my opinion, if I am just dating you, my car is my own and yours is your own until further notice, I don’t care if I drive a put-put or a Rolls Royce.

One thought on “Letting your new man Drive your car; Desperate or Diplomatic?”